This section allows you to view all posts made by this member. Note that you can only see posts made in areas you currently have access to.

Questions / Re: Gapless playback on Ubuntu 12.04

October 18, 2012, 16:06:16
Thank you a lot for your efforts. I already assumed it's a gstreamer problem. I did a bit of more research and it seems I'm not the only one having this problem. Nevermind. Hopefully gstreamer gets a fix soon.
2

Suggestions / Re: Give gMusicBrowser new name & icon to make it more popular

October 13, 2012, 18:52:27
I guess the fact that gmb has been around for a long time isn't any issue. Probably it would just be the opposite effect. If gmb would suddenly appear in a brand new design and have a new name, blog articles on the internet would spread the word even more, exactly because of the new branding. After all, it's bigger news than just another standard update.
3

Questions / Re: Special characters in artist or song tag cause gmb to list scrambled entries

However, I think this should not be the default setting, really. It's confusing and looks like a bug for first-time users. But for those looking for such a special setting, they will find it anyway.
4

October 13, 2012, 14:31:03
As for the popularity of gmusicbrowser, I noticed that in audio player reviews it's often not mentioned or being overlooked, even though the capabilities of gmb are stunning. I think the reason for that has a lot to do with 'look & feel', something many users want these days, especially when they're listening to music. I think it's a major influence on the whole experience of music. It's a 'fun' thing. And the look & feel or elegance of a GUI contribute much to that feeling.

It is indeed already very awesome that users can switch between different layouts. But the whole feeling of gmusicbrowser is still somewhat generic and plain, yet on the other hand confusing for first-time users. Because gmb has lots of functions and access to these functions is somehow cluttering the UI for the average user or often not intuitive. One example: When switching between layouts, the settings button (the cog icon) is sometimes there, sometimes not, i.e. depending on the layout, the menus are there or not. The first time I used gmusicbrowser, I was desperately looking for the settings until I found they are hidden behind this little icon.

However, I know it would be a lot of work, to reevaluate the whole GUI. But as a starter, why not implement simpler things to begin with?

Gmusicbrowser: This name sounds so generic. I would rename it to something nice. And at the same time give it a new and attractive icon that is not displayed pixelated in the Unity launcher, but clean and shiny. This alone would attract more users and make gmb more popular. The UI is a vital part of the user's experience.

In order to avoid confusing for long time users of gmb, the new name could still have some reference to the old name. For example, keeping the very distinct 'G' in the name somehow. Spontaneously I think of something like 'G Player',  'G Tunes' etc. The icon could then be one awesome letter G in a fancy font and with nice colors.

Or do some wordplay and make it more fancy:
'Gee! Player' or 'Gee! Tunes'
(Gee! is bascially a way of saying OMG!)

Or take a completely different route and adapt the name according to the icon. The icon is fun, but needs to get polished up. But if there would be a polished up version of the camel with headphones, then it could be called something like 'Camel Player' or 'Camel Tunes'. Although I'm not sure of 'Tunes' as for Apple's copyright madness.

or 'CamelEon' / 'CamelEon Player'
(deliberately leaving out the H of 'chameleon', in reference to both, the camel icon and to a chamelon, to indicate the capabiltiy of switching layouts that look like other players.)

Or rename it withot any reference to the previous versions. Anyway, as for a new name, possibilities are endless. In my opinion, it should just not be as generic as it is at the moment. The above examples are really just quick examples. Other people might have much better ideas.

Song name: Down the Aisle (with you)
The title contains parentheses. And this causes gmb to scramble the artist entry, displaying it wrongly.

Artist name: Hall & Oates
Gmusicbrowser displays this as two entries 'Hall' and 'Oates' in the artist list, not as 'Hall & Oates'.

Questions / Re: Gapless playback on Ubuntu 12.04

I've sent you a link to where I uploaded the example songs.

Also, I checked once more with tagger software kid3-qt to see if the Lame tag is there. It's there (TSSE), as well as length info (TLEN).

In DeadBeef the gapless playback is perfect. In Audacious it's near perfect, just an almost inaudible crackle of perhaps 7ms, but no pause, hence gapless. I assume these players buffer the tracks in their own specific way to achieve gapless for mp3.

But all other audio players fail (Rhythmbox, Clementine, guayadeque, Banshee etc). So I think it must be a problem of the libraries (gstreamer bug?). I also tried with mplayer, but same problem. Installed then mplayer2 and set gmb to use it, because it's said to be able to do gapless playback, but no luck either.

Or is there something I overlooked? If I mark the checkbox for gapless playback in gmusicbrowser, do I have to enter any value in those fields for the output device (ALSA, JACK, etc)? By the way, how can I see which output gmb has chosen when set to 'auto detect'? I assume, it's ALSA?!
7

Questions / Re: gmb chooses wrong cover art if there are multiple tracks in a non-album folder

In options users could be able to choose:

Oh, and as for my screenshot: The cover is set as front cover. But when scrolling down, the whole pane slided under my mouse pointer, so that I accidentally scrolled this selection list while the mouse pointer hovered over it. This is just another example why overlay scrollbars in Ubuntu sometimes really suck. Maybe the items within this pane could be aligned to the left side? Then users will not accidentally change the cover setting when scrolling down.
8

It's easiest to explain by example.

Let's say I have a folder 'A-ha'. In this folder are various songs. None of these songs has an album tag. They are single tracks. And I've set individual cover art for each song (the single cover). But gmusicbrowser displays only one cover art pic from one of these songs in the folder, for all these tracks. In other words: 'The Sun always shines on TV' has cover art of the single cover, but it's not displayed. Instead, the cover art of the song 'Manhatten Skyline' is being displayed. And this was obviously chosen randomly for all songs in this folder. 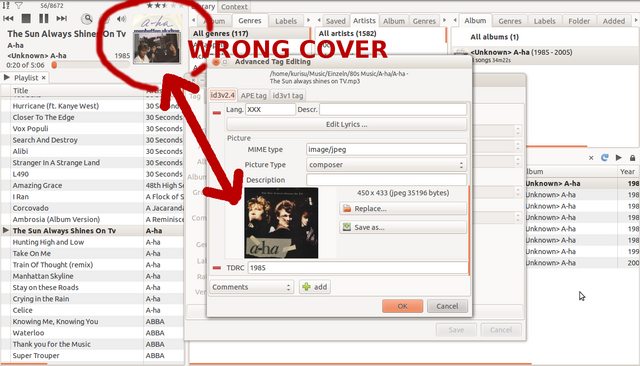 Is there a way to tell gmusicbrowser to use for each file its own embedded cover art instead of 'one cover art for the whole folder'?
9

October 12, 2012, 13:32:31
There's one case, however, when this doesn't work. If there are two albums with the same album title. Happens rarely, but it happens. Then tracks from those albums would be merged together although they don't belong together. That's why the tag 'album artist' exists, exactly for that reason. People have to tag their albums properly, then there's no problem. And with gmusicbrowser it's a piece of cake to correct/add tags.
10

I searched this forum and followed this instruction:
http://forum.gmusicbrowser.org/index.php?topic=556.msg2650

But Synaptic does not show me anything to update. Well, the forum post is from February. So perhaps the gstreamer version was succeeded already.

Anyway, I cannot get gapless playback in gmusicbrowser in Ubuntu 12.04 64-bit. And I don't know why. My mp3 files are encoded with Lame encoder and have the Lame tag. It works with Audacious and DeadBeef. But gmusicbrowser plays with gap.

Questions / Re: How can I display only albums? (without <Unknown>)

I chose the method of filtering out <Unknown>. This works. However, setting the filter was very unintuitive. I always fell for pressing 'save as noname' and ended up with no filter. Until I found out I have to press this harddrive symbol to save it.

And then I had a huge problem to find out how to deactivate a filter. In fact, it's not possible. There should be a filter in the list called 'Show All'. Also, the filter list tab is named 'Saved', whereas I'd expect it to be named 'Selection' (because calling it 'Filter' might be mistaken for sound filters).

As for hiding '<Unknown>': As a quick fix, I would simply put a button or checkbox under the albums list, something like 'Show Unknown'. Internally it's nothing else than an additional filter. Only difference is that this filter doesn't show up in the 'Saved' ('Selection') list.

As a suggestion to make this more user-friendly, I would use three entries in the album list: 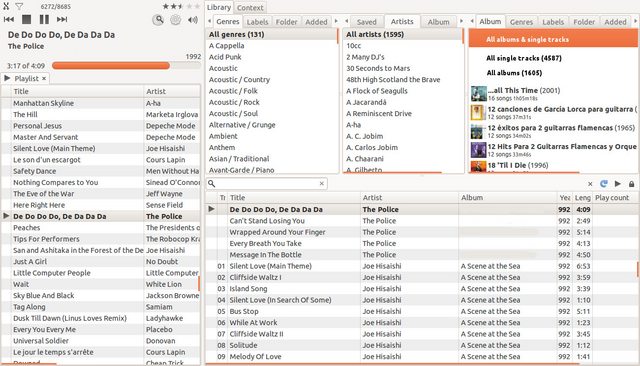 Accordingly, if an artist X is selected, then in the Album tab list it should show all albums of X for this artist, plus all single tracks for this artist.

Alternatively, the whole thing could be an optional setting in the gmusicbrowser's preferences, something like:
'Show tracks from <Unknown> albums as one 'Single tracks' row'.

Or use one optional 'Single tracks' entry and make it switchable from the button under the album list:

Example 1:
[X] Show 'unknown' merged in row 'Single tracks' (selected)
= all songs without album tags are displayed/merged in one fake album entry that contains all single songs from all artists. If it's not selected, single songs will be shown as 'unknown album' for each artist separately.

Also, Show 'unknown' is selected = single songs are shown in the list. If it's unselected, only albums will be shown, but no fake albums, nor a fake album row that contains all single tracks. Single songs don't appear and are filtered out completely. 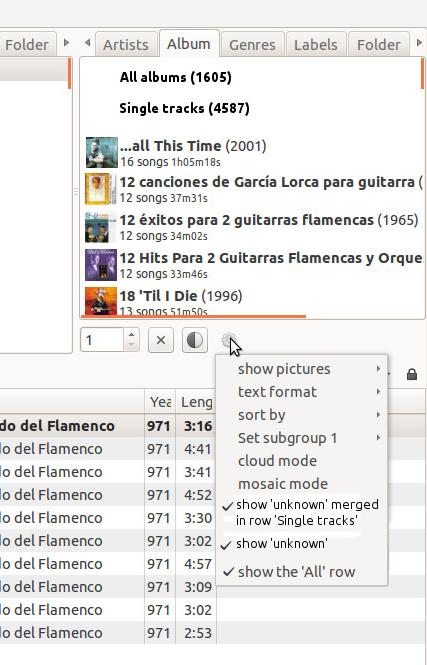 Example 2:
[ ] Show 'unknown' merged in row 'Single tracks' (unselected)
= songs without album tags are displayed as 'unknown' album for each artist separately. In this case, the 'Single tracks' fake album entry is of course not there. 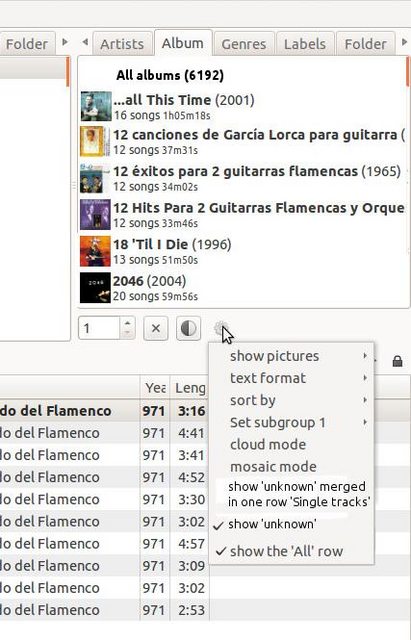 Questions / Re: [How to] Restore gmb icon in the systray on Unity

October 10, 2012, 18:17:58
Didn't work for me unless I removed 'guayadeque' from the whitelist. Because I still had guayadeque installed when I switched to gmusicbrower.

Questions / How can I display only albums? (without <Unknown>)

October 10, 2012, 17:46:33
Hello, I have just installed gmusicbrowser and really love it so far. There's only one thing that bugs me:
I would like to be able to browse through my albums without having all the single tracks as album "<Unknown>" in the list. Is this possible? Or is there a way to filter them? But how can I set a filter for an empty field?